Should You Use JSON or XML for Your API 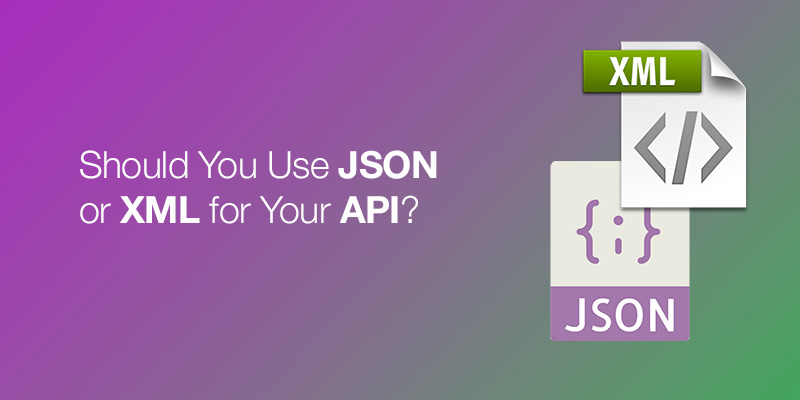 Many developers will argue that JSON is the way to go with any programming project, but even as XML becomes less popular, it has its place in the programming world. There still are times when you should use XML over JSON. If you’re building a web API from the ground up, you should determine which technology is the best for your purposes. Here are some pros and cons for both JSON and XML in an application.

The Pros and Cons of XML

XML is a long-standing language that still has relevance today. Many of the older technologies you see on the market use it, so if you need to work with an API that’s been around for over a decade, the chances are that you’ll need to work with XML. Older APIs don’t give you a choice in the format that you can use.

XML is useful when you have large amounts of properties, methods, and attributes that you need to embed into one record. Suppose you have a file that defines an object, and you need to describe that object’s attributes within the data set. You could use XML and its “HTML-like” syntax to parse out each property and attribute embedded within the record.

You can’t escape XML if you choose to use XSLT. Although seldom used today, XSLT is a part of many front-end web design projects. XSLT is a markup that reads the attributes of an XML record and transforms it to a layout for users to digest. You can liken XSLT to CSS for HTML scripts. CSS tells the browser how to design and present an HTML document to the user, while XSLT describes the way the user should see an XML document.

Another advantage is that XML readers parse and validate an XML message. If it’s improperly formatted, the developer receives an error message. This alert helps the developer avoid poorly structured XML that results in “messy” presentation of data. Because the message can be rejected and sent back to the user, data is always guaranteed to have the right structure when you work with API systems.

Another reason you need XML is if you employ third-party APIs to generate data in your system. If they don’t offer a way to send and receive messages in JSON, then you’re forced to work with XML whether you like to or not. You can still work with JSON in your internal applications, but switching between JSON and XML can be tedious and create added overhead in your programming that isn’t necessary.

Overall, XML is still a valid language for developers who have large volumes of data with several attributes to transfer between API messages. However, most developers don’t like to work with it because the format is complicated and adds to the overhead for data processing.

The Pros and Cons of JSON

After programmers lost interest in XML, JSON took over as the format of choice for passing messages across platforms. Both JSON and XML are platform independent, but JSON is a much more simple language than XML. For this reason, it has some advantages over using XML when you build an API.

Because JSON is simplistic, it makes it much easier to parse. You don’t have all of the tags and attributes of XML, so it’s great when you have simple data objects that you need to pass between two platforms. For instance, if you just need to move a customer object with all of its associated data, then JSON lets you structure your object in a format that is easy to read and easy to identify errors.

One issue with JSON is that formatting errors aren’t validated, which makes it difficult to ensure that users pass the right data to your API. Many languages have predefined classes and modules that make it easy to serialize and deserialize JSON data. Think of this process as a way to package a message and extract it within your application. Complex structures such as XML are difficult to package where JSON is much easier for both developers and the underlying modules that work with the data.

Many APIs use JSON, but it’s also a newer format than XML. If you’re building a new API, you should work with JSON unless you have complex data structures. Any developer that works with your API will think that JSON is the default because it’s become a standard in the industry. If you build a new API with XML, the developers might not be attracted to yours over your competitors. Keep in mind that attracting developers to an API is how technology companies grow interested in their software products.

If you need a way to format JSON, you must use your own parsing and design tools. JSON doesn’t have a design language the way XML has XSLT. You can load JSON data into specific design elements sold by third-parties, but you will need to take large data sets and display them in a browser.

So, Which Format Should You Use with a New Web API?

APIs are the latest in building a software brand. It draws developers to your products and gets them to integrate their own software with your own. It’s a great way to market your technology company and attract more customers.

Developers like APIs that are easy to integrate and easy to read. Complex APIs work for larger, well-known organizations, but they can turn off developers when the company is small with several competitors.

Unless you have a good reason to use XML, you should work with JSON. JSON is simple to understand, it has less overhead than XML, and it’s easier to parse. Unless you have complex data structures that are unavoidable, you should off JSON messaging with your API endpoints. It’s not always the option, so go with XML should you have substantial data structures that require several attributes when formatted.

Although using data formats seems like a minor consideration, it can make a huge difference when you finally deploy your API. Using the right data structure should be heavily considered before you implement it in your design.